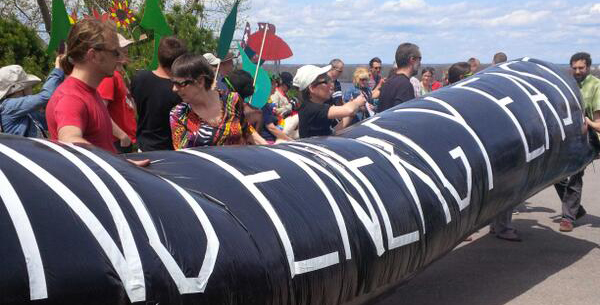 Join us in telling the Ottawa Chamber of Commerce that it's not OK to host TransCanada on the eve of Earth Day!

April 21st is the eve of Earth Day.

As it turns out, however, the Ottawa Chamber of Commerce does not seem to understand its significance.

They are hosting Stefan Baranski, Ontario director for TransCanada for their Eggs n' Icons breakfast series on that morning. TransCanada is the company behind the proposed Energy East project, the biggest pipeline in North America, meant to carry 130 million litres of oil (most of it toxic diluted bitumen from Alberta's tarsands) through our own backyard.

After calling them out and asking them to cancel the event, the Ottawa Chamber of Commerce has decided to go ahead anyways, claiming they are not active proponents of the pipeline, and that it's just a coincidence. The event is not a discussion with balanced points of view, it's pure propaganda for the pipeline.

This is downright insensitive and our concerns need to be heard.

Therefore, we are hosting our own breakfast event, outside of the Sheraton.

It's early, but we'll have some food, coffee, and speakers providing information that TransCanada does not want you to know about!

Let's show the Ottawa Chamber of Commerce what Ottawa really stands for.

Say no to the pipeline, sign our petition here: http://www.ecologyottawa.org/tar_sands_oil

or
Please check your e-mail for a link to activate your account.